Are you taking a course on philosophy? Are you confused about your faith? Do you want to learn the Islamic perspective on Western philosophical ideas?

This part of the program will introduce the students to the essential ideas, thinkers terminologies, texts, methodologies and debates within the Western intellectual tradition – philosophy, theology, history, polity. A comparative approach between Western and Islamic intellectual traditions will be elaborated where possible.

Need help with paying for your course? Visit here for details.

What our students say about the course

"… Before partaking in the course I was wary of studying philosophy since I have heard negative feedback on it…However, Alhamdulillah through the guidance of amazing and inspirational teachers I was able to appreciate works of philosophy and can now clearly see the foundation of ideas and how philosophical arguments regarding epistemology and even the metaphysics arose."

A brief overview of syllabus and modules:

The aforementioned syllabus will be taught through the following five modules: 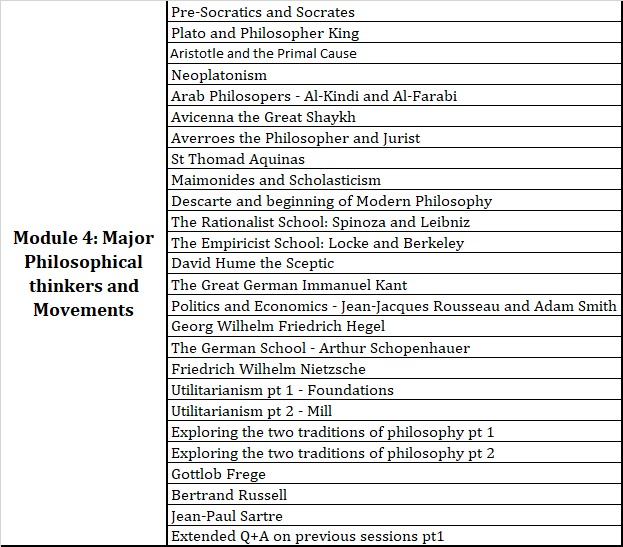 Studied Philosophy as an undergraduate at Kings College London after which he travelled to Cairo to study the Islamic studies curriculum at al-Azhar university, focussing on Islamic law. He also studied extensively in private with a number of scholars with a keen interest in Arabic tafsir (exegesis) and balagha (rhetoric).
He returned to the UK where he completed his MA in Islamic studies with distinction at SOAS thereafter taking up his doctoral studies on the life and work of the great khurasanian Sufi and hadith specialist Abu ‘Abd al-Rahman al-Sulami (d. 412/1021). His PhD was published in 2018 by Equinox Publishing.
Currently, he is pursuing studies in philosophical theology and Sufism with a forthcoming publication on the problem of evil within Islamic thought (AUC Press).
He is a professional translator, teacher and examiner as well as curriculum consultant for GCSE, A-Level and the International Baccalaureate (IB) programs.

After initially completing his Masters degree in Engineering (MEng) at Queen Mary University (University of London) went on to diversify his academic background by pursuing an MA from SOAS (University of London) in Near and Middle Eastern Studies and another from Birkbeck College (University of London) in Philosophy with his thesis written on Imam al-Ghazali’s view on scientific knowledge and causality.
He has also pursued classical Islamic knowledge by studying under a number of local Ulama in London and concentrating on basic Islamic sciences such as Ilm al-Fiqh, Usul al-Fiqh, Ulum al-Hadith, Aqida and Ilm al-Kalam.
His areas of interest include: Islamic philosophy and theology, Islamic legal theory, Islamic history of ‘ideas’, philosophy of science and the scientific method, epistemology and metaphysics in Western and Islamic thought.
He has a number of published book reviews in specialist academic journals and is currently pursuing a research project tentatively titled, ‘Trajectories in Islamic theological dispute’. He is also a qualified teacher of Physics and Critical Thinking.

A British Muslim scholar educated in both the Islamic and Western traditions.
He memorised the Qur’an by heart and graduated from the Darul Uloom seminary Bury, UK, and later undertook studies in ifta’ at Madrasah Zakariyya, South Africa, under Mufti Rada’ al-Haqq, and then at Mazahir ‘Ulum Saharanpur, India, under Mufti Muhammad Tahir Ghaziabadi.
He earned his BA from the University of Johannesburg and completed his MA and PhD in Islamic Studies from the School of Oriental and African Studies in London. His PhD research was a critical edition of Shaykh Abu ‘l-Layth al-Samarqandi’s Kitab al-Nawazil, hailed as the first fatwa collection in the Hanafi school. He holds an honorary fellowship at the Cambridge Muslim College and at The Royal Aal al-Bayt Institute for Islamic Thought, Amman, Jordan.
Mufti Abdur-Rahman has the unique experience of serving as an imam in Muslim communities on both sides of the Atlantic, eight years in Southern California and over five in the great city of London—and his continued work as an international speaker and lecturer enables him to address and offer advice on current challenges that face Muslims in the West.

Why Study at Whitethread Institute?